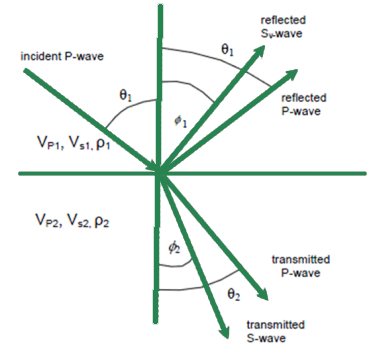 Seismic reflection amplitude changes with distance between shotpoint and receiver,It happens due to energy partitioning.When seismic wave hit a boundary,some of the energy gets reflected and some gets refracted.The reflected and refracted energy amplitude depends upon  physical properties contrast across the boundary.If incident waves is not normally incident,incident P waves get partitioned into reflected and refracted P & S waves.Reflected P& S wave amplitude depends upon reflection coeffecient with respect to angle of incident of seismic wave as explained by Zoepprittz equation,Reflection coefficient for normally incident wave  is a function of compressional wave velocity,shear wave velocity and density. AVO analysis helps geophysicist determine differences in lithology and fluid content above and below the reflector.

Figure: Reflected and Refracted P&S waves due to contrast in physical properties and angle of incidence on both sides of reflector

AVO technique is widely used by geophysicist to identify fluid type for example in case of gas bearing sandstone  amplitude increases with offset on the other hand in case of coal amplitude decreases with offset .In order to do proper AVO analysis,its important to model rock property for known fluid content,with this information we can model other fluid contents also.Bright spots are one of the most important indicators of gas zones but bright spots can also be due to tight rock so in order to identify hydrocarbon special handling of data for AVO purpose is needed so that high amplitude bright spot from gas can be distinguished from tight sand.

AVO behavior is sometimes observed on pre-stack data,stacking the data enhances the signal to noise ratio but at the same time destroys AVO information so AVO analysis requires  processed gathers that are not stacked.

The equation for reflection of compressional and shear wave was derived by Karl Zoeppritz.For normally incident waves  reflection coefficient is function of acoustic impedance contrast between two media:-

AVO utilizes the fact that reflection coefficient varies with changing offsets,and this behavior can be observed in pre-stack gather.As discussed earlier an incident compressional wave falling at the reflector gets partitioned into reflected P wave ,reflected S wave,refracted P wave and Refracted S waves,as defined by Zoeppritz’s equation reflection coefficient of these waves depends on acoustic impedance contrast between two media and angle of incidence.Acoustic impedance of material which is a function of density and velocity in turn depends on the physical parameters  such as lithology, porosity, pore fluid and pressure. Zoeppritz equation for incident wave is given as below:-

RP, RS, TP, and TS, can be calculated from matrix form of Zoeppritz equation by inverting the matrix.

For ease of understanding lets look at relationship between poisson’s ratio and Vp/Vs ratio graphically.

As discussed above presence of gas increase reflection coefficient with increasing offset/incidence angle and when gas is not present absolute reflection coefficient decreases with increasing offset/incidence angle.This theory was first applied successfully by Ostrander for seismic data interpretation,and his work started the application of AVO in petroleum industry.

Rutherford and Williams(1989) in Geophysics volume 54 classified AVO anomalies on the basis of acoustic impedance as below:-