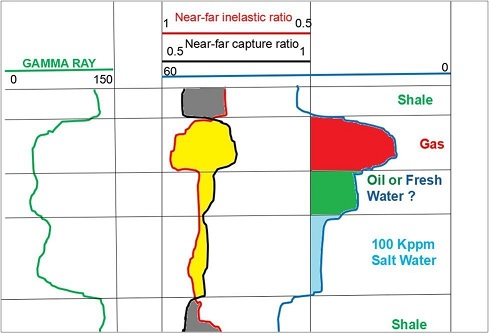 1. Thermal decay time capture mode: Based on neutron induced capture gamma decay time measurement. Primary measurements in capture mode are capture cross-section of formation or Sigma and capture count rate from near and far detector. Other measurements are near to far capture count rate ratio and various capture yields. Data from this mode is used for Water saturation evaluation in saline formation water. As a thumb rule, this method works well in formations with water salinity higher than 35Kppm. Depth of investigation in this mode is 12 to 15 inches.

2. Carbon-Oxygen inelastic mode: Primary measurements in inelastic mode are Carbon-Oxygen ratio, Calcium-Silicon ratio, inelastic count rate and various inelastic elemental yields from both near and far detector. Other measurements are near to far inelastic count ratio, inelastic to capture ratio. Data from this mode is used for oil Saturation evaluation independent of formation water salinity. Depth of investigation in inelastic C/O mode is 6 to 8 inches. To get data with high certainty it is recommended to do 3 to 5 passes at logging speed of 3 ft/min or less if possible in this mode.

In a freshly drilled well, openhole logs such as Gamma Ray, Neutron, Density, Sonic and Resistivity are run and these open hole logs are used for hydrocarbon saturation estimation. Saturation evaluation using mentioned openhole tools also act as base case for estimation of sweep efficiency/depletion.

If formation water salinity is low or unknown, Carbon-oxygen ratio method can be used for saturation evaluation. Only issue with Carbon-Oxygen method is that it can provide oil saturation but it is blind to gas. Due to low carbon density in gas, Carbon-Oxygen ratio method is not able to see gas. Carbon-Oxygen ratio is recorded in inelastic energy range which is higher than 8 million electron volts (Mev).Recording data at such a high energy level is itself a big challenge hence detector needs to be dense, with high effective atomic number, high energy resolution and having faster decay time. Apart from having good detector pulsed neutron source also should be capable of producing higher number of neutron per second. We will discuss pulsed neutron source and detector in a separate article. For confident oil saturation estimation in carbon-oxygen mode porosity has to be higher than 12pu.The reason for need of high porosity in this mode is dynamic range of chart used for interpretation is small at low porosity, this leads to high uncertainty in oil saturation estimation.