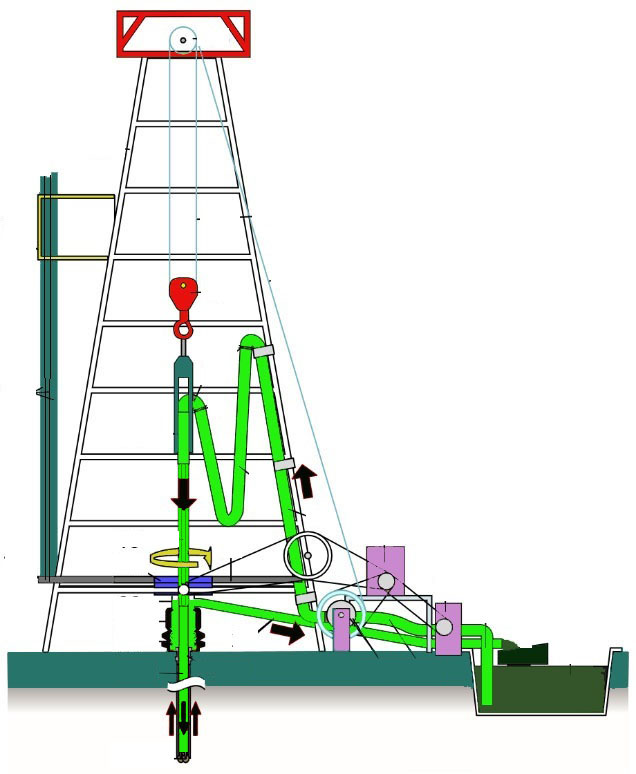 Major systems on drilling rig are classified as below:-

In this article we will discuss Power system ,Rotating system and Hoisting system

Drilling  rigs most of the time operate in remote locations where power supply is not available,hence they need to generate their own power supply.Power supply generator on drilling rig could be diesel engines,diesel-electric engines or sometimes even butane engines.Power is than supplied to electric motor connected to different rig systems by belt,chains and drive shaft on mechanical rig or by generated DC electrical power in electric rig.Power goes to mud pumps and rotary table  while drilling and to draw-backs while tripping.

Rotating system on drilling rig consists of rotary table and drill stem (kelly,drill string and bit).Rotary table is a mechanical device with square hole  on derrick floor that provides clockwise rotational force to drill string to help drilling a borehole.It contains rotary bushing which is used to turn kelly and kelly bushing.The number of  revolution rotatory table makes in one minute is called rotary speed.

Kelly is a steel bar which is hexagonal or square in shape with hole in the middle for fluid path.It is used for sending rotary motion from rotary table or kelly bushing to drillstring.Kelly’s outside shape matches that of inside of kelly bushing,so that kelly can be fitted and move freely inside kelly bushing.

The complete assembly containing drill pipe,collars and other bottom hole components which makes drill bit turn at bottom of hole are called drill string.Drill bit is attached to the end of drill collars.As drill bit does the grinding or cutting of the rock,bit type is chosen on the basis of rock type and drilling conditions.Common type of bit used are PDC,tri-cone and diamond.Wellbore is drilled by adding joints of drill pipe to the end of kelly.hoisting system is used to pick up the kelly so that it hangs from the derrick above the rotary table.Kelly is unscrewed from previous joint of pipe by used large capacity,self locking wrenches called tongs,Kelly is than screwed into a new joint of pipe stored temporarily in rat hole.The new joint of pipe and kelly are than screwed to the previous pipe and lowered into the hole to resume the drilling.Trip is referred to pulling out of entire drill string ,wiper trip or  short trip is called when part of drill string is pulled out.These trips are performed to verify that drill string can move through potentially troubled section of well bore  drilled recently.

In modern drilling rigs rotary table and  kelly are replaced by top drive,as an mechanical device it helps in drilling a borehole by  providing clockwise torque .Top drive moves up and down on derrick vertically and is placed underneath  the traveling block .The advantage of top drive is ,it allows to drill 60-90ft or “two to three joints of drill pipe”,depending upon rig size.Whereas with kelly and rotary table driller can drill only one joint (around 30ft) at one time.Top drive helps rig save time and be more efficient.With kelly in order to increase additional length of drilling pipe  entire string must be withdrawn but with top drive, draw works directly picks up a another stand from rack to create double  joints.Making lesser and bigger connection saves rig time and reduces the chances of string getting stuck.Top drives are classified on the basis of  their “safe working load” (SWL)  and different types and sizes of motor.Top drives are big technological advancement as compared to kelly,Availability of top drives has increased the drillers ability to drill more extended reach wellbores.

Hosting system are the parts of drilling rig which are used to perform all lifting activities on rig.Lifting activities on rig includes lifting and lowering of drill stem , casing  and other  equipment’s as per need ,in and out of borehole.The hoisting system includes Crown block,Draw Works.drill line and traveling block.Crown block are located at the top of derrick,its an fixed set of pulleys on which drilling line is threaded.Under the crown block an freely moving section of block is attached containing  set of sheaves through which drill line is threaded,this freely moving section of blocks is called traveling block. The multi thread ,twisted wire rope strung between traveling block,crown block and draw-works is called drill line.Drill lines are strung in multiples of 4,6,8,10 or 12 lines.Higher number of drill lines means higher he lifting capacity but lower the running speed.On bigger drilling rigs,while raising and lowering the derrick ,drill lines are capable of handling traveling block loads of over million pounds.To distribute the line stress and wear,drill line needs to be cut and slipped at every ton-miles.In order to determine amount of hole friction and amount of weight to put on bit ,an weight indicator is attached to the drill line.traveling block,crown block and drill line gives the rig ability to lift hundred of thousands of pound and on larger rigs even million pounds.The large winch on which drill line spools is called draw-works,it is one of the most important part of hoisting system used for raising or lowering the traveling block.drill line winds on draw-works drum and gets connected to crown block and traveling block.Draw-works mainly consists of five parts:-1.Drum,2.Motor(s),3.Gear,4.Main brake and 5.Auxiliary brake.The Draw-works is some time directly connected to diesel engine using metal chain belts or it can be run by AC or DC motors.Gear can come is three speed combination.The main brake may be friction brake or a disk brake usually operated manually whereas auxiliary brake is used to absorb released energy  when heavy loads are lowered,they are connected to drum.

The crown block and drill string  are supported by derrick,derrick is pyramidal in shape and provides good strength to weight ratio.They provide the space to stack the pipe that is pulled out of hole.Height of derrick is referred to in multiples of pipe joints such as double derrick for derrick that can stack double pipe  joint,treble derrick for derrick that can stack triple pipe joints.An pipe joint is approximately 30ft.Higher up in the derrick monkey board and pipe fingers are present.

The derrick man stands on monkey board to handle the top end of each stand of pipe during trips,the pipes are put in the fingerboard and tied properly to make sure it does not falls.The derrick substructure is rated by the weight of drill string stacked on it plus weight of casing that can be lifted.The top of derrick substructure is called derrick floor and it is the primary working area of rig.

The deck located on the side of derrick floor  and between pipe racks is called catwalk.Catwalk is the primary location for core processing and wireline logging tool assembly.