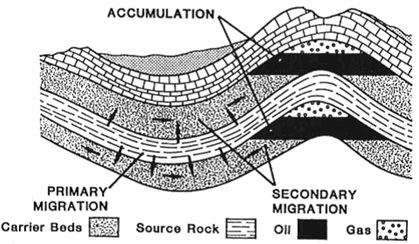 reservoir rocks. In a petroleum system, there are mainly two types of migration

Most of the hydrocarbons are expelled in liquid state from the source rock . The dynamic  process of expulsion of the oil out of the source rock is driven itself by oil generation. The  total organic carbon or TOC of Good source rocks range from 3 to 10%. When the TOC is  high, then the kerogen is main load-bearing part. With the conversion of organic matter  into oil, the load-bearing kerogen will convert into liquid. Most source rocks are  carboniferous shales(also called black shales)There will be high fluid pressure of the oil  within these carboniferous  shales which leads to the formation of micro fractures in the  rock. After the formation of micro fractures, the oil is squeezed out followed by collapse  of source rock. Such kind of Micro fractures are found in most productive source rocks  which are full of remnants of oil.

Secondary migration is a process of migration which involves the movement of  hydrocarbons through fracture network in the source rock to reach reservoir rock.  Migration mostly happens for only one or more separate hydrocarbons phases  (gas or liquid depending on pressure and temperature conditions). Buoyancy is the key  driving force which functions vertically and is proportional to the density difference  between water and the hydrocarbon. Hence, migration  will be quite stronger for gas as  compare to heavier oil.