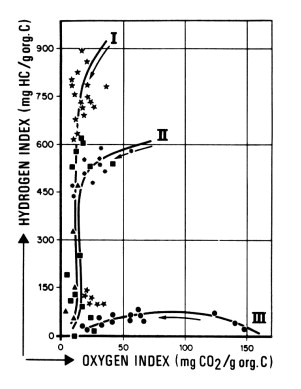 Kerogen is defined as organic constituent of sedimentary rocks which is not soluble in normally found organic solvent due to its higher molecular weight. Soluble portion of kerogen is called as bitumen. Kerogens are made up of variety of organic materials like wood, pollen, algae etc. When heated as per required correct temperatures in earth crust they release crude oil or natural gas, depending upon temperature at which it is heated.

Temperature of oil window to release oil is 50-150degC and to release gas is 150-200degC.The type of kerogen present in the rock controls the type of hydrocarbon generated and they are the major factor controlling oil vs. gas yields in reservoirs. High amount of kerogen present in shales makes them source rock. If shales have high kerogen content but have not exposed to higher temperatures may form shale oil reservoirs.

Type-I Kerogen, Sapropelic:-oil shales with this type of kerogen that provides the maximum output of oil and are considered as best conventional oil deposits.

Type-II Kerogen, Planktonic/ planktonic and Sulfurous:- It is mainly composed of organic materials of marine origin, formed in the absence of oxygen. High quantity of Sulfur is also found in considerable amounts. Pyrolysis of Type II kerogen produces lower quantity of oil than that of Type I, however amount of oil produced is still good enough to regard Type II rocks as possible oil sources.

Type-III Kerogen, Humic:- Type III kerogen  is formed by continental plant matter which  does not have much of waxy matter and lipids. Type III kerogen is least productive for oil generation upon pyrolysis and hence they are least favourable when it comes to generating oil.