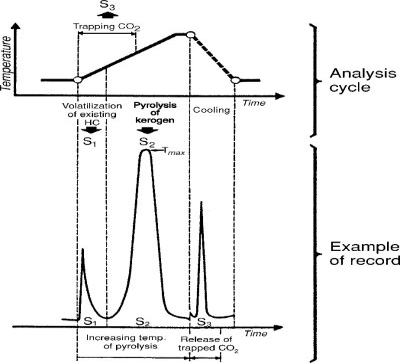 “The process of thermochemical decay of organic material at high temperature without oxygen is known as Pyrolysis”. Pyrolysis is mainly used to measure maturity and richness of possible source rocks by the Organic geochemists. During pyrolysis analysis, organic content in source rock is pyrolysed without any oxygen which is followed by the process of combustion. This is followed by the measurement of the  hydrocarbon content and amount of released carbon dioxide . “Rock-Eval” is considered as one of the most commonly used pyrolysis techniques.During this pyrolysis technique, an sample is kept within a vessel followed by progressive heating to 550 degC in an inert surrounding. At a moderate temperature, the hydrocarbons found in samples are volatilized. The hydrocarbon quantity is than measured and registered as S1 peak.

Fig-1 Cycle of analysis and corresponding recording from Tissot,B.P and Weite ,D H 1984.

Finally Percent TOC is calculated using the below formula.