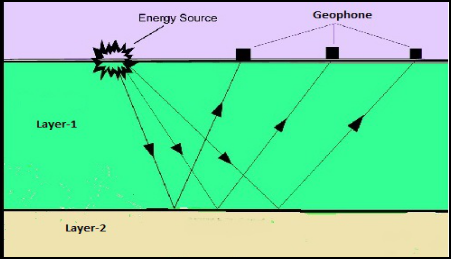 In marine data acquisition source is air gun and receivers are hydrophone.

Land Seismic Data Acquisition:Land seismic data Acquisition starts with survey crew laying out the line to be shot.Transit and chain survey or its equivalent survey is done to determine the position and elevation of both shot point and center of geophone group.In the area of heavy vegetation or difficult terrain, trail building or trail cutting crew may be needed.If dynamite is being used as source than drilling crew comes in to drill holes below Low velocity layer.after that recording unit comes in to record the data.Normally with Common depth point recordings shot points are close together of the order of around 100 meter apart as compared to 400-500 meter with split dip recording.Land data acquisition is slower as compared to marine as majority of land survey consists of moving the equipment’s across farms or difficult terrains or sometimes through over populated communities.

Marine seismic data acquisition is very challenging as compared to land seismic data acquisition. First step in designing a marine seismic survey is by studying data from previous seismic surveys and reconnaissance survey done in the block.Than grid lines are plotted to decide the lines along which data is needed to be acquired.Multiple sources and steamers are needed in order to design a 3D subsurface image,Shooting direction is decided on the basis of kind of vessel being used,steamer length ,number of steamers being used and most economical path is chosen.Field data is recorded in SEG-D format and than its converted into SEG-Y format for further processing.

Below things  needs to be in hand before starting the survey design:-

In order to see geologic feature on seismic section,width and thickness of feature must exceed the vertical resolution of reflection survey.Data acquisition plan should confirm that optimal data for pre-stack processing particularly noise removal and pre-stack imaging will be acquired,this needs symmetrical  and proper sampling  in both the cases of 2D or 3D data acquisition which ensures good quality migration.Designers of seismic survey should always keep in mind that coarse sampling can lead to migration artifacts and it should be avoided.Sometimes interpolation works but not always so sampling interval should be chosen wisely.

Even before starting the survey program ,oil companies arrange agreement from land owners directly affected by exploration activities to do seismic surveys on their land.Each of the seismic program i.e 2-Dimensional,3-Dimensional and 4-Dimensional surveys have their own data acquisition,interpretation and presentation requirement.These days even GPS (Global positioning system)technology is also incorporated to allow data correlation with specific location.

1.2-Dimensional (2D) Seismic:- 2-Dimensional Seismic is the simplest form of seismic data acquisition,In 2D seismic acquisition source and receiver are placed in-line.Data is presented in two dimensional map.Limitations associated with 2D Seismic survey are,it does not provides the good indication of depth or thickness of target formation.Due to inline source-receiver arrangement Spatial location and degree are limited in 2D acquisition.To receive more reflection returning from patch of subsurface reflector,receivers need to be arranged in a scientifically designed grid over the area.

2.3-Dimensional (3D) Seismic:- 3-Dimensional seismic requires seismic lines to be placed in in-line and well as cross-line directions in an narrower grid pattern.Its an newer technique as compared to 2D-seismic.Data interpretation from 3D seismic allows the result to be presented in 3 dimensional pattern and this technique provides good sense of thickness and shape of potential target.As 3-D seismic uses narrower grid lines as compared to 2-D seismic,Its data density is also higher than 2-D seismic.Commonly 3-D data is acquired by putting grids into inline as well as cross line,as this 3D seismic grid pattern provides reflection of object being imaged from different angles which results into more detailed and accurate three dimensional  image of subsurface reflector.

3.4-Dimensional (4D) Seismic:- 4-Dimensional seismic is an enhanced 3D program which also looks at the timing of the data collected.Data interpretation from 4D seismic is more sensitive than 3D seismic in terms of size,shape and thickness of formation.4D seismic is the newest type of seismic program.